Nana Mishima (美島奈々, Mishima Nana?) is the childhood friend of Suguru Aizawa and Kakeru Aizawa and Kakeru's love interest/fiancee in the Area no Kishi series. She takes up the role of manager for Kakeru's football team in Enoshima High. On another side, she is considered a genius at football on par with the Aizawa brothers, earning the title "Little Witch" for her prowess on the football field.

Nana has brown shoulder length hair that is tied at the back. Her eyes, like her hair, are the same shade of auburn. When she was young, she had very short hair and was mistaken for a boy.

At school, she usually wears a uniform consisting of a white long-sleeved shirt and a dark blue skirt, she has a red sailor bow (It has also seen to be turquoise) around her neck, she can also be seen wearing a dark blue jumper over her shirt. Her sleepwear consists of a larger version of the Enoshima team shirt.

Her training track-suit consists of a white jumper and trousers with two red strips on the side. While playing for the Nadeshiko Japan Team, she wears the samurai blue uniform with the number 7 printed on the back.

Nana is a sweet but tough girl who cares for her friends and team. She is very serious about her job as the manager and looks out for the welfare of the whole team, including enforcing a strict diet on Araki to make sure he stays in top shape. Because she and Kakeru are childhood friends, she is always cheering him on during practices and matches. She even helped him improve his football skills by training with him at the park at night. However, she also worries a lot about him especially when he is depressed or hurt. She is very shy when it comes to her swimsuit.

When Nana was young, she was a member of Suguru Aizawa and Kakeru Aizawa's football team. Kakeru affectionately calls her Seven because of her name Nana. Even though she was the only girl on the team, she wasn't treated like one due to her boyish appearance and behavior. Both she and Kakeru played forward on the team until sometimes later when she had to move to the USA with her parents. Before she left, she made a promise with Suguru and Kakeru that they will be in Japan's National Football Team together.

A few years later, she went to watch Suguru's football game in Mexico and they reminisced about the days when the three of them played football together. Suguru asked Nana to help Kakeru overcome his fear of using his left leg (which was caused by a traumatic event in a previous training match). She is considered a genius at football and can hold her own even against male football players. Her prowess on the football field earned her the nickname the 'Little Witch' for her magical plays. Nana played for the United States at schoolgirl level two years before the anime began. 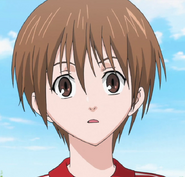 Nana in a towel

Add a photo to this gallery

Add a photo to this gallery
Retrieved from "https://areanokishi.fandom.com/wiki/Nana_Mishima?oldid=7910"
Community content is available under CC-BY-SA unless otherwise noted.